BY ANUSHKA WANI '21
The transition from R.J. Grey to ABRHS can be daunting, especially due to the major upgrade in size. Because the high school’s layout is so different, it’s tough to figure out where the numerous water fountains, bathrooms, and staircases are. However, with this guide, you’ll be able to navigate the high school like a pro!

First things first: the layout of the school. The school is split up into four major sections: North, South, East and West. Once you enter the school through the front doors, the West wing is on your left North is straight ahead, and if you go right, you’ll pass through South on your way to East. As you wander these wings, you’ll probably stumble across a staircase to the second floor. Once you’re up there, the layout is the same as the first floor (with the exception of North being on the third floor, obviously).

The most important thing to know are the locations of the bathrooms. On the first floor, you can find one on each side of the cafeteria, as well as on each floor of the East and West wings. There are also bathrooms across from the library and more in the fitness center, along with a few single stalls in Stearns Gym in Upper West, and also some in the locker rooms below.

Now, certain bathrooms are better than others: I wouldn’t recommend going to the Lower West bathroom due to the long lines; go to the one in Upper West to avoid being late. Avoid the Lower East bathroom at all costs. During lunch, if one bathroom—usually the one near the band room—has a long line, try the other one. In general, using the bathroom during passing time almost guarantees that you’ll be late to class, so try to get there early, or leave your backpack in class before you go. Other than that, it comes down to where you are and how fast you need to get to a bathroom.

The second most important thing is the staircases. You’ve probably already noticed the Senior Staircase, as well as the two main staircases in East and West. These are the most popular. Always stay on the right when you go up or down any staircase, and there won’t be accidents caused by students bumping into each other when they go in different directions. There are more overlooked staircases at the back corners of both West and East. Another hidden staircase gets you to Upper West from North, and it’s one of the best ways to get to the library from the cafeteria. Exit the cafeteria on the side of the Regan Gym, and walk straight. Just before the small set of stairs that leads to the school lobby, take a right and walk through the single door at the end. The staircase leads to the Stearns Gym, making it the best staircase to use to get to the library from the first floor.

There are three other staircases in East. One is at the very end of the hallway right by the elevators. This one is rarely used, so it won’t be very crowded at all. Next to that staircase, there is a window that looks over the tennis courts. It has a cute little nook that you can sit in with a friend during a free period. Nearby, a small hallway to the left offers another staircase leading to the auditorium. This one is used a bit, but not as much as the main arteries. The last staircase in East can be found if you follow the hallway the East bathrooms are in and take a right at the end of that hallway. There you’ll find another staircase. This is the most crowded of the three.

The last few staircases are more hidden, leading to the Stearns (Upper) Gym. If you go to West Commons and enter the big double doors at the bottom of the ramp, you’ll find a staircase going up to North. Once you go up there, you can turn left and open a smaller set of doors to another, smaller staircase. This is not a main staircase, but it can still get crowded at the end of the day. The last staircase is located where you enter the gym area by the locker rooms, and it leads up to the Upper Gym too. This staircase is usually only used by gym classes, so it is usually pretty empty.

The last few staircases are more hidden and located by the locker rooms in Lower West, and they both lead up to opposite sides of the Stearns Gym. These staircases are usually only used by gym classes, so they are reasonably empty.

Last but not least, we have our beloved water fountains! There are two types: the water-bottle refilling types and the regular drinking fountains. Of the drinking fountains, one set is across from the library, one is both Upper and Lower West, and one set are on either side of the cafeteria. Meanwhile, there is a refill station in Upper and Lower East, as well as by the main entrance and inside the cafeteria. The best water fountain is the one on the first floor next to the lobby. Other than that one, I would just stay away from any of the water fountains in the school. They either taste bad or are just too warm.

​Anyways, I hope this guide is helpful for your high school experience! It’s quite nice knowing where things are in the school, instead of having to stumble upon them along the way. 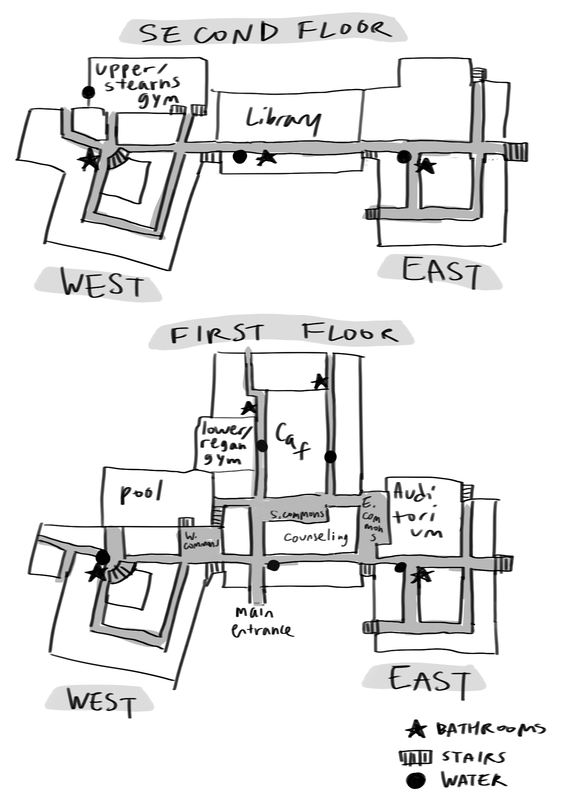