As we prepare for the upcoming school year, the battle against COVID-19 persists, forcing ABRSD to continuously adapt. Thus, in May, the district reduced the 2020-2021 budget by around $550K to account for economic uncertainty and to further support student education and school operations.

The budget is sourced mostly from local and state governments along with small federal contributions. Locally, the school committee, superintendent, and district administration formulate the annual budget and divide the funds into aspects such as faculty salaries, insurance, utilities, etc. The state government distributes funding among Massachusetts schools, and federal departments create policies for distribution and general nationwide stratagems. For instance, Title I aids schools in high poverty areas, and the IDEA Act supports students with disabilities.

Ultimately, local leaders decide the final budget. After reducing the costs of multiple events and projects, receiving additional funding, and storing money into a COVID contingency fund, the district created a final $96,912,701 budget for the school year as depicted in the table below.

The money for capital—the construction or renovation of buildings—was reduced by$350K. “The district approved a long-term capital improvement plan in 2019, identifying a list of projects to be undertaken over thirteen years,” explains David Verdolino, finance director of the School Committee. These plans included both high-value projects, such as the Charter Road renovation, as well as smaller tasks (e.g. high school flooring, systems upgrades at elementary schools, and exterior/interior work at the R.J. Grey), which were deferred to a future date. Fortunately, these delays will have a minimal impact on students, especially remote ones.

Additionally, $235K, originally set aside for faculty salaries, was taken out of the budget. The removal, Mr. Verdolino states, reduced the salaries of  “several instructional and administrative positions” and accounted for a recalculation of budget estimates such as overtime pay, which covers time spent on transportation and lesson planning after school hours. Also, the superintendent’s salary will not increase as it usually does every year. Mr. Verdolino continues, “By making these reductions, we avoided the necessity of making cuts to educational programs elsewhere.”

Similarly, the district cancelled the in-person School Committee (SC) and School Leadership Team (SLT) conferences for the upcoming school year, saving $20,000. Historically, the SC uses its conferences “to enhance their knowledge of school administration, law, finance, etc. and to stay on top of educational issues” according to Mr. Verdolino. Likewise, the SLT normally attends “an off-site summer retreat to plan the upcoming year's educational program and to develop the strategic goals for the future improvement of the system.” These meetings will take place virtually instead.

The district is also receiving $114K via the federal Coronavirus Aid, Relief, and Economic Security (CARES) Act. Approved in March 2020, the CARES Act provided state governments $13.5 billion in K-12 formula grants to distribute among school districts. Further, 300K will be taken out of reserves.

Ultimately, the reductions, cancellations, and added funding freed up $1.01 million in the district’s annual budget. However, $500K was transferred into a COVID Contingency Fund and will remain untouched in case additional funds are needed. Still, for the upcoming school year, the district will direct the rest of the money ($510K) towards back-to-school programs.

ABRSD intentionally cut plans that will not harm student education. While the district’s reopening plans have encountered controversy, the district has not lost sight of their mission to provide the best education possible for ABRSD students. 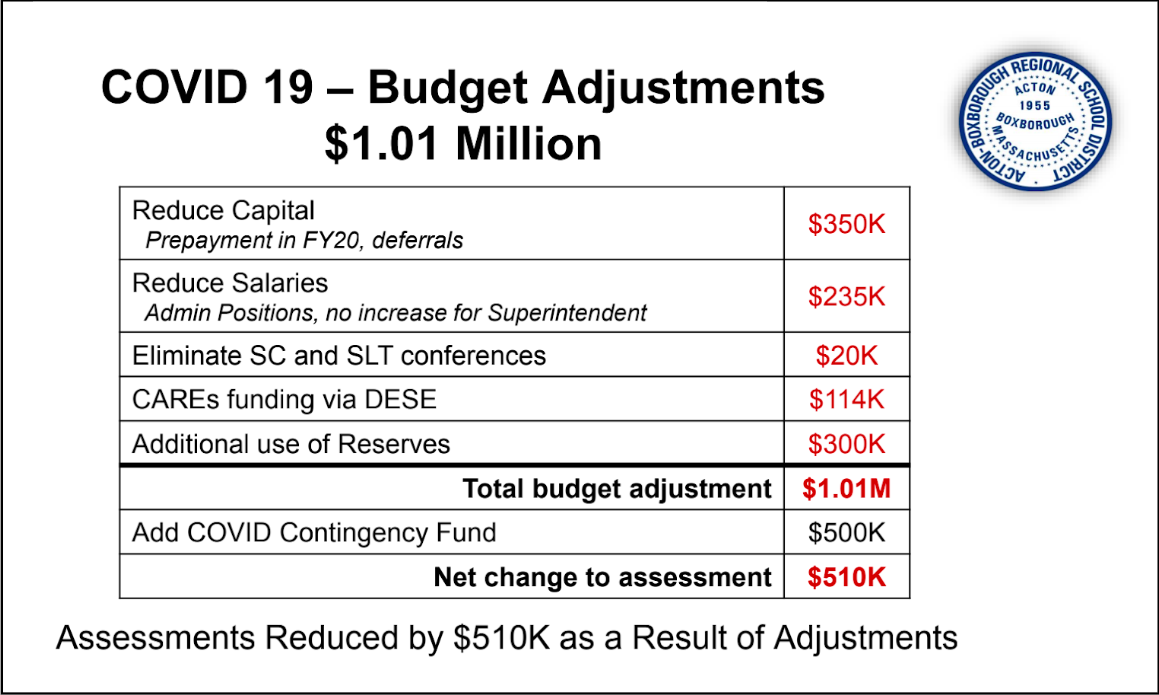